An exerciser wants to twirl a 1 meter long baton in a horizontal plane through 360 degrees as he moves around in a room without hitting the walls. He does not mind any shape but wants to minimize the area of the room. Note that a circular room of 1 meter diameter (with an area of pi/4 square meters) is far from the minimum area possible.

Pick up this challenge for yourself! Victory is ours when we have strength and courage to run our own race!

Some important comments: To the student readers: from Ref: Problem Primer for the Olympiad by C. R. Pranesachar, B. J. Venkatachala, C. S. Yogananda: The best way to use this book is, of course, to look up the problems and solve them!! If you cannot get started then look up the section “Tool Kit”, which is a collection of theorems and results which are generally not available in school text books, but which are extremely useful in solving problems. As in any other trade, you will have to familiarize yourself with the tools and understand them to be able to use them effectively. We strongly recommend that you try to devise your own proofs for these results of Tool Kit or refer to other classic references. …

My remark: This is the way to learn math from scratch or math from first principles.

The book is available in Amazon India or Flipkart:

Let us get started on plane geometry, some how or the other, now. Rather than starting with a lecture, let me start in a un-conventional format. A little challenging problem for you. Try to prove the following (Morley’s theorem):

In any arbitrary triangle, draw the trisectors of all the angles. Prove that the triangle formed by the points of intersection of adjacent trisectors (of different angles), taken in pair, is always equilateral.

Important Note: Please do not take look at any solution from the internet or any other source. You can use the basic theorems only presented in the Geometry toolkit, like as in, Problem Primer for the Olympiad, B J Venkatachala and/or in the lecture.

Thanks to Math Online Tom Circle and also thanks to Singapore Math Tuition:

if and only if MQ is perpendicular to PS.

Using the properties of the real product of complex numbers, (please fill in the gaps here), we have

if and only if

hence, MQ is perpendicular to PS, as claimed. QED.

Prove that in any acute angled triangle of sides a, b, c, semi perimeter p, in-radius r, and circumradius R, the following inequalities hold:

Let D be the foot of the altitude from A, and D will be on the side BC since the triangle has only acute angles. Now, by summing up

For the other part, we have the following equivalences:

—– call the above as relation I

and by Minkowski’s inequality, we have

. Then, we will have

which holds for all positive a and

because of the AM-GM inequality. This tells us that (1) is true, and thus so is our conclusion.

Ref: Problems for the Mathematical Olympiads (from the First Team Selection Test to the IMO) by Andrei Negut

There are two extremely beautiful, fundamental theorems in mathematics — (1) the number of primes is infinite (2) the square root of 2 is irrational.

Let us look at Fermat Numbers

. We will show that any two Fermat numbers are relatively prime; hence, there must be infinitely many primes. To this end, we verify the recursion

from which our assertion follows immediately. Indeed, if m is a divisor of

. But, m=2 is impossible since all Fermat numbers are odd.

To prove the recursion, we use induction on n. For

. With induction, we now conclude:

, which in turn, equals 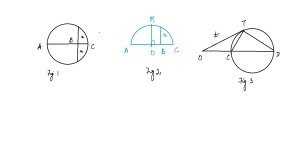 The average of two lengths (or numbers) is called their arithmetic mean:

is the arithmetic mean of a and b. The geometric mean is the square root of their product:

It is easy to find the geometric mean of two positive numbers algebraically, by solving for x the equation

. For this reason, the geometric mean is also called the mean proportional between a and b.

Is there any way to find these quantities with ruler and compass? The arithmetic mean is easy enough: simply lay off the  two lengths end to end on the same straight line and bisect the total segment. A method for the geometric mean is suggested by the equation:

as diameter, draw a circle and the chord perpendicular to  that diameter at B. (Fig 1). This chord is bisected by the diameter, and we recognize a special case of Theorem 2,

, which says that x is the mean proportional between AB and BC.

In practice, one uses only half the figure. (Fig 2).

Inasmuch as MO, the perpendicular from O, the mid-point of AC, is the longest perpendicular to the semicircle from its diameter, and is also a radius equal to

The geometric mean of two unequal positive numbers is always less than their arithmetic mean.

Why do we need the word “unequal”?

We now restate the part of Theorem 2,

If, from an external point, a tangent and a secant are drawn, the tangent is the mean proportional between the whole secant and its external segment.

Of course, the two segments PA and PB become the same length when the chord is moved into the limiting position of tangency, bringing A and B together. If you are bothered by this, note that there is a proof possible, which is quite independent of any limiting process.

if we relabel the diagram as in Fig 3 here, and then call OT by the single letter t, we have

if and only if t is a tangent. These labels are chosen to fit the lettering of the next blog on this topic.

I trust you will agree that we have done nothing difficult so far. Yet you may soon be surprised at the structure we are about to build on this small but sturdy foundation. We are now ready to look at some of the geometry they didn’t teach you.

For the love of Maths: the Queen of all Sciences
Blog at WordPress.com.
Loading Comments...