Even and odd numbers

If it is odd, multiply it by 3 and then add 1.
If it is even, divide it by 2. Then repeat this process on the number just obtained. Keep repeating the procedure.

The Collatz conjecture, made by Lothar Collatz in 1937, claims that, if you repeat this
process over and over, starting with any whole number greater than zero, eventually you will finish up with the sequence … 4, 2, 1, 4, 2, 1.

A conjecture is a statement that is thought to be true but has not been proved mathematically to be true for all cases. Although the Collatz conjecture has been shown to work − often very quickly − for many whole numbers, there are some quite small numbers that take a very long time to come down to … 4, 2, 1, 4, 2, 1.Apply this process to all the whole numbers greater than zero and less than or equal to 30.
For each one, find:
• how many steps it takes to reach 1 the frst time
• the largest number in the sequence. (For the sequence above, 58 takes 19 steps and reaches a maximum of 88.)
Look for shortcuts and work with a partner if you like.

Long division
Here is a way to check how good your long division skills are. If you are able to follow it
through and get to the end without making a mistake, you can consider yourself a qualiꏨed long division champion.
• Start with any two-digit number (for example, 58). Write it three times so that a six-digit  number is formed (585 858).

1 A totient number is the number of fractions between 0 and 1 (not including 0 or 1) for
a given denominator that cannot be reduced to a simpler equivalent fraction. The totient
number of 2 is 1, since we have

can be reduced to

. Find the totient numbers forall denominators up to 12.

3 The totient number is related to the prime factors of the original number, since these will
determine which fractions can be cancelled. Using this information, calculate the totient numbers of 72, 81, 98 and 100.

Without using a calculator, can you say which of this set of numbers could not be square numbers?

You can just by checking the last digit (units digit) of each number.

Do a bit of experimentation with a calculator and find the four digits that square numbers end in. (This eliminates the third number in this set).

Now check out the pairs of digits that your odd square numbers end with. What digits are possible in the tens position of an odd square number? (This number eliminates the second number in the set).

Complete these sentences with what you have discovered: 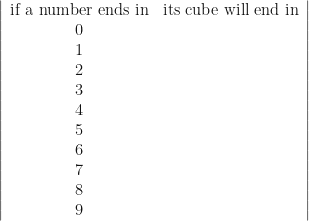 Fourth powers are in fact just square numbers that have been squared. For example,

Fifth powers have a magic of their own. Do a bit of experimentation to find out what it is. In p, particular, I suggest you create tables of second powers, third powers, fourth powers and fifth powers of all numbers from zero to 20. Check, compare…actually, it is fun to “compare rate of growth of powers with increasing integers”…this idea involves rudimentary ideas of calculus…

An odd number can usually be written as a sum of a prime number and another number, which is a power of two. This is true for all odd numbers greater than one but less than 100.

For example, if we choose 23, we can say that it is equal to

. So, there are two ways to represent 23 as a sum of a prime number and a power of two. But,

Some odd numbers like this can be expressed in many ways.

If you are adventurous or courageous, try to find such representations of all odd numbers lying from 1 to 100. You need a lot of patience and stamina and grit…but you will develop an “intuitive feel or tactile feel for numbers”…that’s the way math begins…

There are some odd numbers which cannot be expressed as a sum of a prime number and a power of two. Such numbers are called

An example of an obstinate number is

as the working below shows:

The next power of 2 is

Making a list of the powers of two up to

might be a good place to start with. Look for short cuts and patterns as you proceed further.

Have fun with numbers !!

This site uses Akismet to reduce spam. Learn how your comment data is processed.